Belton was chartered in 1855 soon after the Columbia and Greenville Railroad was built. It soon became a junction point of the C & G, the Piedmont and Northern and the Blue Ridge (Southern Railway). With 36 passenger trains serving the town. The city is still served today by two railroads:the Greenville & Western Railway and the Pickens Railway. 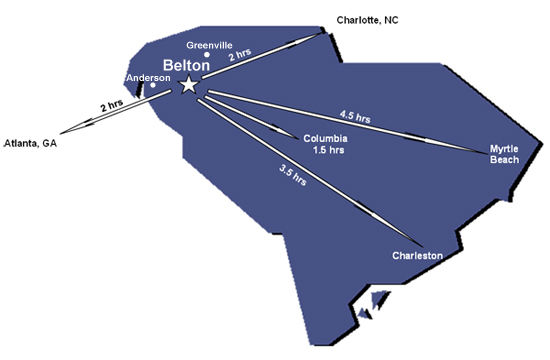 The city is at the junction of four highway arteries with connections to i-385in Greenville County, I-26 in Laurens County and I-85 in Anderson and Greenville. Anderson is only 15 minutes away and its only 30 minutes to downtown Greenville. Far enough away for Belton to retain its small-town ambiance and friendliness, but close enough to the big cities for any cultural, educational, work or shopping experience anyone would wish.

With a population of 4,400 it is the second largest town in Anderson County. It is unique in having a thriving downtown business district, the historic Town Square, which is undergoing a $1,000,000.00 revitalization. This has been a cooperative effort between the state, the county, the city and local organizations. In fact, the local organizations have provided most of the work and much of the money. This is indicative of the involvement of the people in the community that makes Belton a great place to live.

There are many other successful business, as well as many historic sites in the city or area which is located on the S.C. National Heritage Corridor. Historic residential areas are within walking distance of the Town Square. One of these, Brown Ave., particularly reflects small town “Old South” charm and appearence. The symbol for Belton is the Standpipe. This is a 155′ tall, concrete reinforced water tank with a capacity of 165,000 gallons which was built in 1909. It towers over the city and has the appearance of a medieval castle tower. There are only three remaining in S.C. and this is the tallest.

The city is home to two elementary and one middle school, with the high school being only 10 minutes away. Other cultural and educational facilities are the Belton Center for the Arts, the Belton Depot, Ruth Drake Museum and a new branch library.

City Of Belton 2019 All Rights Reserved